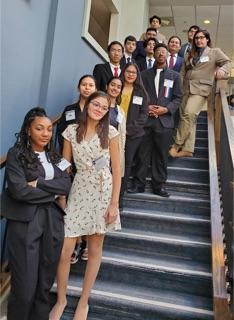 Congratulations to the following JSA student members for their unprecedented 5 winning debates that took place over the weekend, November 16-17, 2019 during the Fall State in Iselin, NJ :

BLOCK ONE- Sebastian S.: Resolved, The message portrayed by plus-sized models is more detrimental to American society than beneficial.

Also in BLOCK FOUR- Kevin A.: Resolved, The pursuit of policies that align with The Monroe Doctrine has always protected South American Nations.

BLOCK FIVE- Autumn H.: Resolved, The United States will collapse from within.
Each student won JSA Best Speaker and had their debated side (Pro/Con and Sub-Con) resolved in their favor at the JSA Fall State Debate on Sunday, November 15, 2019.
Such successes would not be possible without the support of Ms. Chapman and the Club Advisor, Jeanne Baridon who along with co-advisor, Sofia Karanikolos and co-coach, Patrick Oriani, hold advisory meetings each week.